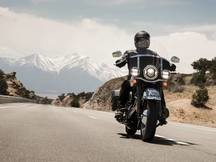 The Land of Lincoln is resplendent with beautiful natural landscapes that command your attention as you pass by. Scenic rivers, lush forests and open prairies make for an excellent backdrop when you’re cruising down a historic two-lane highway on your Harley-Davidson® Sportster® Iron 883™. Because Illinois has so much amazing unexplored territory with plenty of winding roads, Great River Road Harley-Davidson® has detailed some of our favorite Illinois motorcycle routes. We are located in Quincy, IL, along the majestic Mississippi River.

This 24-mile route follows the Elizabeth Road north. You’ll start in the city of Mount Carroll, a historic former mill town in the northwestern corner of the state. Take Route 78 north until you reach its juncture with Elizabeth Road and turn left to follow this road due west for about a mile before it curves north.

You’ll encounter Zion Road, which overlaps a bit with Elizabeth Road, and then Elizabeth Road will turn into E. Massbach Road. A short jog onto E. Albrecht Road will allow you to swing left onto County Road 7/S. Derinda Road, which will wind north until it meets Hwy 20. Turn left and follow Hwy 20 into the village of Elizabeth, named for Elizabeth Armstrong, an early settler who lived at the Apple River settlement here and helped to defend Apple River Fort in the Black Hawk War in 1832. You can visit the historic fort while you’re here. Check out some of the local antique stores and diners if you like.

Along this brief drive, you’ll see plenty of trees while riding along swooping curves, which can sometimes be intense, so use caution. You’ll also have views of open fields and rolling hills as you ride, making for a picturesque jaunt.

This 46-mile loop will take you south from the town of Murphysboro at the southern tip of the state into the town of Anna before scooping north again to end in the city of Carbondale. You’ll experience panoramic views of the surrounding countryside as you ride along tree-lined roads.

Beginning in Murphysboro, take IL-127 south out of town for 21 miles until you reach its junction with Il-146 E. Turn left onto IL-146 and follow it for 2.5 miles through the city of Jonesboro until you reach Anna.

You can choose to explore some of the great food options in Anna, or you can turn left from IL-146 E/S Main Street onto W. Vienna Street and head northwest out of town on the historic Old Hwy 51. In five miles, you’ll reach the village of Cobden on the crest of the Shawnee Hills. Continue north on Old Hwy 51 for another 15 miles until you reach the city of Carbondale.

The Rock River Run follows IL-2 southwest for 42 miles from Rockford to Dixon along the beautiful Rock River, a tributary of the Mississippi. There aren’t any deviations on this route; simply follow IL-2 as it winds along the Rock River and admire the scenic views!

You’ll pass directly through the towns of Byron and Oregon in addition to the forested George B Fell Nature Preserve. Prior to this, you can stop to investigate Castle Rock State Park, which has an overlook that gives you sweeping views of the Rock River below. Continue south through Grand Detour until you reach the city of Dixon, renowned as the boyhood home of former President Ronald Reagan. You’ll find plenty of history to explore here along with lots of great food to sate your appetite after your trip.

In the market for a great condition used Sportster® or other bike to ride through the Prairie State? Our Quincy dealership carries a number of used Harley-Davidson® Sportsters for sale, including the Forty-Eight® and the Iron 883™ models. Great River Road Harley-Davidson® proudly serves the cities of Springfield, Illinois, and Columbia, Missouri.great-illinois-motorcycle-routes